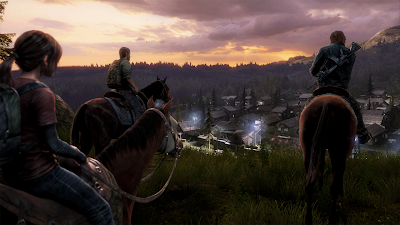 The two most engaging video game experiences I've had in the last twelve months were the HD re-release of Metal Gear Solid 3: Snake Eater and Naughty Dog's critical darling The Last of Us. Despite some cosmetic differences, the two games have a lot in common. Both are third person action games with an emphasis on scavenging. Your primary means of propulsion in either was a hunched, reticent crawl. Impatience punished with a retry. Players should have been scouting ahead, logging patrol patterns and looking for holes. Lots of time to think then. Why did this feel so fresh?

The seventh generation was unusually long. Systems cost exorbitant 1980s hi-fi prices out the gate, and everything remotely successful was iterated. Stagnation held sway. The visible video game mainstream became a yawning chasm of sequels, each propped up by poached mechanics and flavour of the month interaction. Everything resembled everything else. The Last of Us stuck out because it looked a little further back than rhythm action battle prompts. Most obviously, Resident Evil 4's upgrade system was smuggled in, forcing the player to deal with permanence. What's going to get me to the next checkpoint? Deeper pockets for bullets, or a holster that lets me hold another pistol? Who says I'm even going to find one? The Last of Us was also Hideo Kojima's basic sneak 'em up, bitten and infected. Melodrama dialled way back, replaced with a video game approximation of the paternal love story central to The Road. Horror pops on triumph.
Posted by Chris Ready at 16:21:00