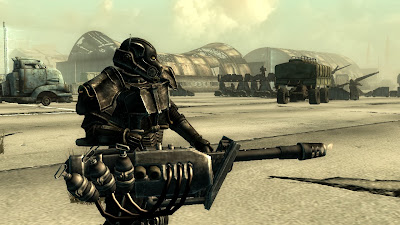 Fallout 3 had a thread of narrative woven through it. Identity established through statistic choices and facial feature sliders, you were set free to plod along through the ruins of Washington DC. Your main quest was to find your missing father, puzzling out his movements following an escape from an isolationist nuclear shelter. These breadcrumbs drove the game on, unlocking new areas and enemies. If you got pally with the locals, they'd offer distraction tasks that got you exploring. These missions taught you to be patient and methodical, instructing you in the basic tools of post-apocalyptic survival. Those avenues exhausted, it was up to you to create and discover your own adventure. Doggedly follow the father quest line and eventually it'd stall the title dead with a disappointing pay-off that had to be retconned through DLC.

That's Fallout 3's narrative, but it wasn't the story. It wasn't the game. Fallout was the land, and all the people in it. Fallout was wandering around a God forsaken rubble pit, stumbling across decrepit buildings and traumatised survivors. Although framed by a binary morality system, Fallout 3 frequently put the players in positions with no obvious solutions. If you found your way to the Tenpenny Tower luxury hotel you'd be confronted by a turf war between two equally unappealing factions. You couldn't do right for doing wrong. Throw in with the bigot who ran the place and he'd ask you to vaporise a thriving human settlement because he considered it an eyesore. Side with the gang of idealistic zombies and the tower's innocent human inhabitants would end up dead and stuffed into a cellar. This idea of moral uncertainty was the cornerstone of Fallout: New Vegas, a semi-sequel that relished compromise and missed opportunities.

The Fallout experience was rifling through pip-pip computer records, uncovering solemn accounts of post-war hardship. The sunken Vaults scattered about DC were an explorers paradise. Layers upon layers of burnt out living space, each housing secrets more terrible than the last. You could make allies out of dogs and mutants, and then be stuck trying to keep them out of trouble. Fallout 3 was wandering, plundering, discovering. The player as a cultural archaeologist, digging deep into the paranoid psychological state that facilitated the world's devastation. If you ever wanted to ride with The Road Warrior, or found the idea of investigating Los Angeles 2029 appealing, this was the game for you.
Posted by Chris Ready at 21:44:00