The VVitch: A New-England Folktale 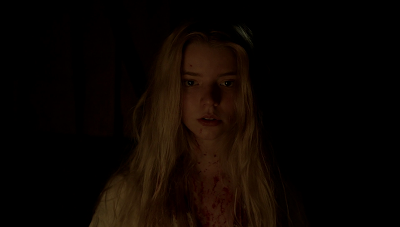 The VVitch describes an overwhelming state of fear. Even at default, the central household is assailed, cast out of the 17th century's version of civilisation thanks to a disagreement regarding Puritanical gospel. With nowhere else to go, the family attempt to put down roots next to a dense, decaying forest. Long before Satanic forces even begin to make themselves known, the film piles on tension. There's never a concrete sense of safety for these characters, their hand-built house offers no relief, instead it amplifies the sharp, alien sounds that travel at night, stressing the danger a person must put out of their mind if they are ever to find rest.

William, the father, is not a conqueror, he cannot bend the environment to his will. Attempts to harvest this barren land are thwarted by the dry, miserly earth, vermin and uncooperative rifles alike. Unable to farm, he loses himself in woodcutting, performing the task as a form of exhaustive self-flagellation. This relentless. physical hardship is felt by all in the household and matched by the theological weight bearing down on them. The family's conception of God is neither comforting nor encouraging. It is spoken of as an indifferent, astral force that sees and judges all.

In her prayers, eldest daughter Thomasin confesses to sins committed in thought, indicating a paralysing, all-consuming belief that beats down rather than raises up. As the oldest child, Thomasin holds a position of crippling responsibility. While she toils with straw and manure, her siblings play. If they argue, it's her fault. If isolation and puberty urge her younger brother to glance at her corset, well, she was asking for it. William and his wife Katherine discuss their daughter as if she is nothing more than chattel. She is constantly blamed and ultimately expendable.

Thomasin's mother wants rid, her father (at best) views her as a prize commodity to be traded away. There is no future for her here. The VVitch expresses the unease this idea creates in a succession of desperate, manic encounters that track towards the dissolution of the family unit. With no sane framework to contextualise their situation, the household slowly implodes, consuming and excreting itself on the edge of the known world. When Thomasin's rebellion finally, explicitly, arrives it's tempting to read the situation as a neglected daughter offering herself up to the kind of safety and stability that her parents have utterly failed to provide.
Posted by Chris Ready at 19:26:00 0 comments

What do you do when you've got loads of one-and-done monster suits rotting away in a warehouse? If you're Tsuburaya Productions, you invent a brand new TV superhero to beat them up. Rationed out in five minute blasts during a children's variety show, Redman purports to organises all the shameless recycling into a desperate battle between the vengeful spirit of an intergalactic refugee and the ghosts of galactic brigands. In practice, the clips are instead a hundred strong procession of zero-exposition scraps featuring wild tonal shifts. One minute our hero is bumping into the frumpy monsters with all the technical grace of a pre-school tantrum, the next he's hurling explosive Christian iconography into his crumbling, defeated foes.
Posted by Chris Ready at 17:23:00 0 comments 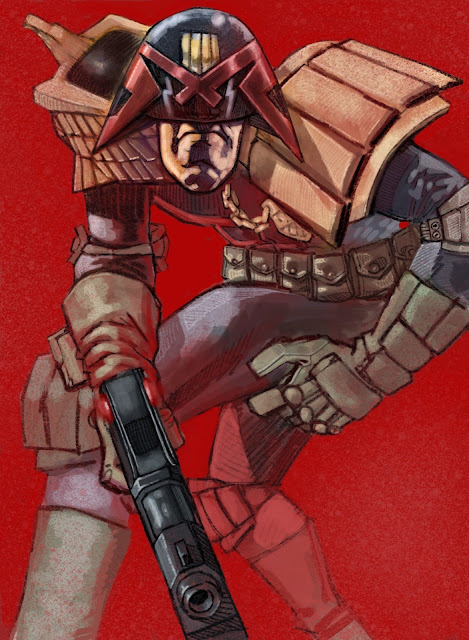 Deadpool, with its healing factor lead and adult-ish certificate, reads like a golden opportunity for one lucky special effects make-up house to go absolutely crazy. Picture it: teams of people spending their way through Rupert Murdoch's fortune with the express purpose of manufacturing dozens of lifecast Ryan Reynoldses in various states of shredded disrepair. Sadly, despite having created The Girl with the Dragon Tattoo's savage opener (incidentally the best James Bond credit sequence since Maurice Binder passed away), director Tim Miller's ambitions lie elsewhere.

Oily, fucking machinery be damned, there are dick jokes to crack! Body horror, like everything else in Deadpool, isn't an idea to be plucked apart and reexamined on a blockbuster stage, it's an easily digestible punchline. A jabbing, weightless signpost to be recognised on the way to yet another Seth MacFarlane style gag. Deadpool is nothing but a series of listless, desperate sketches. The film pitches itself as Alfie for the superhero cycle but we're never given access to anything that has the potential to be emotionally consistent, never mind devastating. There's no sense of contradiction in Wade's incessant fourth-wall shattering either so, unfortunately, rather than something poppy and exciting, we end up with an X-Men spin-off that plays like an unending Hannibal-King-in-Blade: Trinity supercut.
Posted by Chris Ready at 13:58:00 0 comments 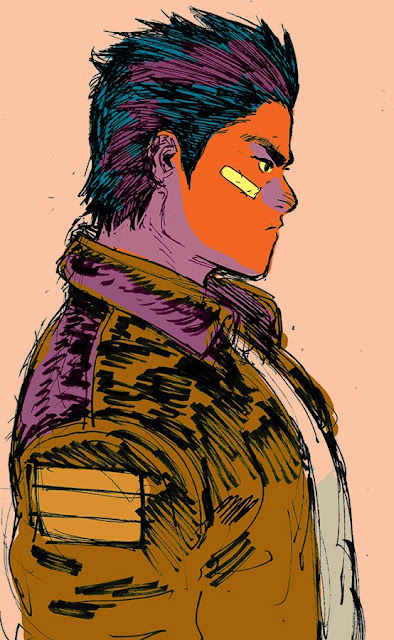 Sadsic - The Light Goes Off / Rememberance

The X-Men series hails from a different time, when superhero movies were a rarity rather than the entire tent-pole landscape. The films have grown and adapted to the ubiquity of their genre, but their tone remains rooted in a sensibility that values something other than anodyne merchandising. Bryan Singer has steered enough successful instalments that the director gets to really knuckle down on his interests, which largely seems to be the domination and penetration of hard, gleaming bodies as well as the deification of pouting youths.

X-Men: Apocalypse's story is scant, full of recycled character beats churning through remixed situations. The 1980s setting is little more than a visual affectation, an opportunity to put Olivia Munn in Chanel-ish metallic wools and Tye Sheridan in polo shirts and mall leathers. Mutants who made their bones in X-Men: First Class are still youthful, unblemished realisations of their comic book counterparts, ageless archetypes to be jammed into whichever era offers the greater pop impact.

Once again Michael Fassbender's Magneto has a reason to disconnect with humanity thrust upon him. Screenwriter Simon Kinberg acknowledges this routine development by having Mags scream at the sky, pleading with a God who doesn't answer. Why him? Is poor Erik Lehnsherr doomed to be a monster? This chaotic, cosmic idea of preordained events would seem to have textual purchase in Oscar Isaac's Egyptian ubermensch Apocalypse, unfortunately that character barely progresses beyond a credible target for teenage expulsions.

Instead it's left to Singer himself to orchestrate the annihilation, the director gamely complying with a comprehensive display of decapitations, impalements, umpteen eviscerations and even a couple of outright obliterations. The casualness of X-Men: Apocalypse's cruelty even finds expression in how these superbeings interact with the world around them. It's a given that this cataclysmic minority see themselves as something distinct from the hoi polloi. If you're in the gang it doesn't matter how many civilians you murder or which cities you reduce to all-purpose rubble, you'll always be welcome back at Xavier's School for Gifted Youngsters.

X-Men: Apocalypse then is the first film in the series in which adult perspectives feel superfluous. The power of life and mega-death is explicitly claimed by children who are defined by their isolation and eagerness to please. By remaking the same basic young adult actioner over and over again, Singer has arrived at a film that careens back-and-forth between the tree house morality of Saban's Mighty Morphin Power Rangers and the kind of deranged, body-warping violence you'd expect from an OAV based on a Toshio Maeda manga.
Posted by Chris Ready at 23:18:00 0 comments 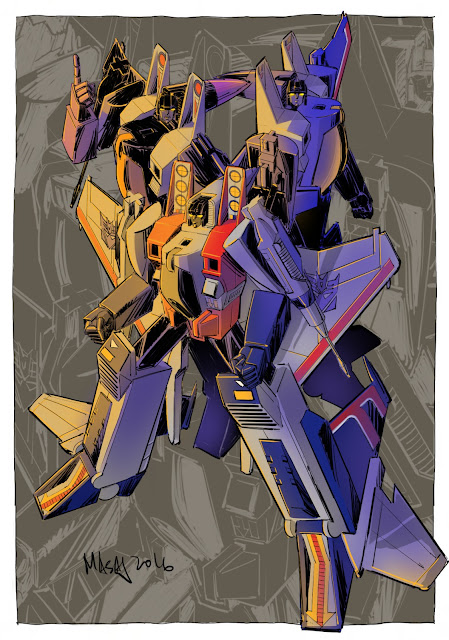 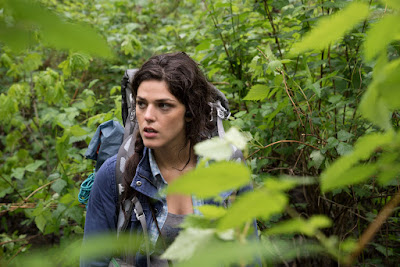 Eduardo Sanchez and Daniel Myrick's The Blair Witch Project was designed as a document, ideally discovered as a dupe cassette, then experienced without knowledge of its artifice. This was filmed testimony, a narrative found and solemnly assembled out of hours and hours of hysterical footage; supernatural snuff working in concert with a dead actor PR campaign on loan from Ruggero Deodato's Cannibal Holocaust. For their pass at the material, Simon Barrett and Adam Wingard account for the deluge of shaky cam films that have followed, taking the same basic misadventure premise then beating in a succession of fun house zaps.

Rather than replay the original's short days, long nights structure, Barrett and Wingard transport their characters to a timeless, hostile environment that aggressively distends the situational horror. So instead of methodically building dread, Blair Witch jettisons reality, positing a more overtly supernatural enemy that now has complete dominion over every aspect of her space. The central threat is no longer an invisible prankster, she's the land itself. Thanks to Wes Robinson's vlogger, we pick up a few scraps of trivia regarding The Witch's torturous passing, and a further insinuation that she bled deep into the Earth and took hold of it. Wingard's take may lack the original's loping intensity but his film's booming sound design and harsh, corrupted cutting envelops the audience in a series of jolts that'd have William Castle grinning.
Posted by Chris Ready at 00:34:00 0 comments