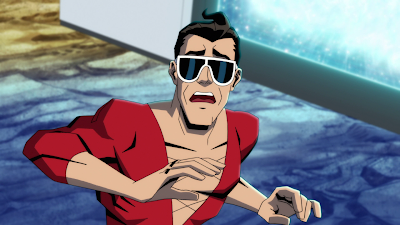 A dramatically bizarre adaptation of NetherRealm Studio's fighting game series that spends less than 80 minutes interrogating the idea of a Superman who has suffered such profound loss that he longer takes issue with extrajudicial murder. While the story presented by the Mortal Kombat devs is little more than a scant justification for internecine Justice League punch-ups, it has clearly captured the imagination of the studio heads at Warner Bros, arguably influencing their entire approach to a post-Marvel cinematic universe. Arriving eight years after the first game in the series, 2013's Injustice: Gods Among Us, Matt Peters' Injustice utilises that brawler's airtight justification for an angry Superman - Joker tricks him into beating a pregnant Lois Lane to death before levelling Metropolis with a nuclear weapon - but otherwise fails to, logically, take the audience to a place where the Man of Steel is then cleaving through a warehouse rave full of teenagers with his heat vision.
As a narrative proposal, Injustice is series of violent lurches; the feature film as flip book product that assumes goodwill garnered elsewhere massages over the gimcrack offered here. How else do you explain a Harley Quinn who debuts whacking an expectant woman over the head with a hammer before defaulting back to an overtly sexualised comic relief? Perhaps Injustice's brevity simply exposes the dissonance constantly acting upon works that wield such well-established characters? It's not enough for the piece to simply work against expectation, it has to be seen to create a completely alternative reading. Any shortcuts in that solution break the trance. As a work of animation, Injustice is flat but legible. The superheroes themselves are, largely, shot and arranged in poses straight out of a colouring book. The exception - the only hero who feels gooey and animated - is Plastic Man, the Dark Knight's ringer, who gets to ooze through grates in a subterranean Supermax or inflate his body into an enormous, deadly, latex action figure. While these deformations have nothing on those employed by Monkey D. Luffy in Fuji TV's never-ending One Piece series, they are (at least) a brief distraction from the rest of the film's cutscene-level clunking.
Posted by Chris Ready at 14:05:00