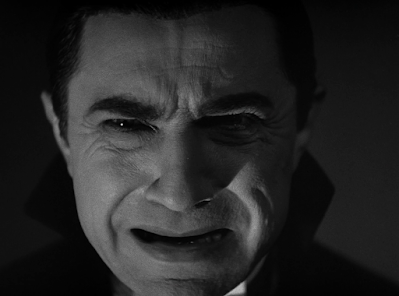 A flat and fleeting adaptation of Bram Stoker's novel that nevertheless lodged Bela Lugosi's arch portrayal of Dracula in the public imagination. Lugosi's Count is a hypnotic bounder, happily fixing his stare on his social inferiors in order to gain the access he desires. In Tod Browning and (uncredited) co-director Karl Freund's film, Dracula is appraised in terms of his foreignness and the ways in which he differs from the drippy Englishmen he rubs shoulders with. His vampirism then is framed as an extension of his smouldering, European, sexuality; a supernatural sensuality that has men and women fawning all over him. Dracula's first victim is Dwight Fyre's Renfield, portrayed in this film as the solicitor who facilitates Dracula's move from a crumbling castle to an Abbey in England. Once the paperwork is in order, Dracula feasts on his guest, transforming Renfield into a creeping familiar. Although hopelessly besotted with his undead master, Dracula regards this pathetic, predatory, creature with an abashed disgust.
Once in foggy old London, Dracula prowls the streets dressed to the nines, feasting on flower girls and encircling the Seward residence. The lion's share of Browning and Freund's film takes place in and around this draughty household, with Dracula haunting the patio in search of welcome and coerced invitation. It's during this section that Lugosi's Dracula finally aligns with the character's seductive reputation - previous feedings characterised by their opportunism or, in the case of Renfield, desperation. Once bitten, Helen Chandler's Mina mumbles about the Count in terms of the tension he has introduced into her life. Previously determined to sleepwalk through a marriage to David Manners' terminally dull John Harker, Dracula's intrusion has made Mina forget herself. Outward propriety be damned, this mysterious, moody, foreigner has awoken something in this previously prim Englishwoman. When Mina talks about Dracula, she seems to drift away. Mentally checking out of conversations at first then, later, physically leaving her sappy fiancé to go and cavort under a cape in the garden.
Posted by Chris Ready at 22:52:00