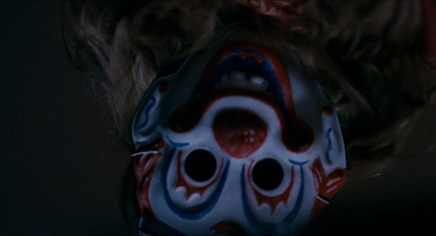 Writer-director Rob Zombie maintains his ferocious commitment to human ugliness with Halloween II, a mire deep franchise entry that hijacks the fright mask branding to tell a story focused around the lingering radiation of trauma. Scout Taylor-Compton's Laurie Strode, having survived the murder of her parents and many of her friends in the previous film, is living with Sheriff Brackett (a brilliant turn from Brad Dourif) and his daughter Annie (Danielle Harris). Strode is frozen in a fight or flight response, simmering in the anxiety of having been pursued and attacked. She dreams of empty hospitals filled with bodies and a relentless, lumbering, shape. Her days are spent oscillating back-and-forth between venomous invective and a sobbing tenderness. In terms of writing and performance, this is a far more nuanced and sympathetic portrayal of a gnawing stress disorder than you might expect given the rest of the Michael Myers saga.
Unlike the recent David Gordon Green entries, 2018's Halloween and this year's Halloween Kills, Laurie's experiences haven't tempered her, they've obliterated her. She struggles to maintain a cordial relationship with Annie - the person closest to her in terms of a lived experience - and finds herself slipping into self-destructive and self-isolating rhythms. The strange frequencies apparently generated by Michael Myers' madness have polluted Laurie as well, causing the teenager to experience parasomnia episodes in which she acts out instances of inherited murder. Conceptually, Rob Zombie's films run with the idea that Laurie and Michael are brother and sister, an insinuation threaded into the original Halloween - via additional footage - during the production of the first sequel, when the former was scheduled to air on television. Zombie, rather than simply use this piece of trivia to demonstrate his grasp of John Carpenter's alternative edits, makes their familial relationship his linchpin.
Zombie's Myers, himself the product of the sustained mental and physical abuse he suffered during childhood, is a special attraction sized phantom who drifts in and out of existence on the fringes of his home town, Haddonfield. The psychic broadcasts that, eventually, envelop Laurie centre around half-remembered fragments from Michael's childhood; items and people that have grown  - in the absence of any other stimuli - into massive, totemic, forces that urge his violence on. His mother, Sheri Moon Zombie's Deborah Myers, has been transformed in death from a put-upon but doting parent into a vengeful spectre that demands blood tribute. A toy horse, given as a gift by his mother during one of his early psychiatric stays and probably one of the few possessions he was ever able to hold on to, has ballooned into an enormous white stallion that seems to represent Michael's own thundering, dutiful, musculature. Michael is also visited (and assisted) by himself as a boy, frozen in the moments when he took his sister's life. Zombie's beautifully grainy film pulls Myers apart, rendering Carpenter and Debra Hill's supernatural killer as an unholy trinity of interconnected instability - the mother, the muscle and the child. They represent a force that exerts a palpable drag on reality, warping and fouling everybody they come into contact with.
Posted by Chris Ready at 00:02:00