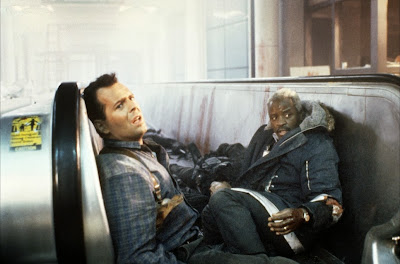 A vulgar cocked-out sequel about an ego-driven maniac who is always right. Die Hard 2 recontextualises the vulnerable hero of the first film, taking a guy who had the ability to weep for his failing marriage and transforming him into a flippant Schwarzenegger analogue. Although he shares a writer credit on Die Hard, screenwriter Steven E de Souza isn't interested in constructing a progressive, mutating, arc for this John McClane. Die Hard 2 instead moves with the same mechanical grace as a mid-80s Austrian Oak film. In short, this McClane is an arrogant, insistent, prick. Die Hard posited a situation in which McClane fluked an inside track on the mayhem, thanks to his smarts, but mainly his geography. He was embedded. Die Hard 2 attempts something similar, but frames it on a hunch.
Couple this aggressive intuition with a sequel think that demands every stake possible be raised into the heavens and you end up with a hero who spends the majority of the film seething and screaming at people. An interlude in which McClane accidentally roughs up a meek janitor, doesn't apologies, then shakes him down for airport blueprints is a particularly brutal structural grind. Fortunately this overindulgence extends to everything in Renny Harlin's film. A tidal wave of invectives is matched by some truly nasty, brain haemorrhaging, violence. Die Hard 2 is unrestrained; an unreconstructed male wish fulfilment cranked all the way up. Harder also enjoys a particular kind of mystique in the UK thanks to some BBFC deletions made to the film on its original release. Trimmed for a 15 rating then incessantly beamed into my mind on pan and scan VHS, the unedited 18 edit - complete with icicle injury detail and gooey pistol wounds - still registers as wonderfully, gleefully, excessive.
Posted by Chris Ready at 00:00:00