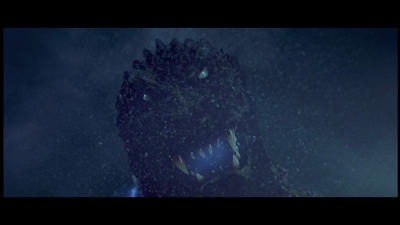 Not since 1954's Godzilla has The King of Monsters been such an irredeemable force of annihilation. Gamera: Guardian of the Universe director Shusuke Kaneko's sole contribution to the Godzilla series is an apocalyptic royal rumble tinged with world-shredding terror. People don't simply flee from this devil beast, they limp away to dark hospital corners to shiver and convulse at the sheer horror of his existence. Godzilla, Mothra and King Ghidorah: Giant Monsters All-Out Attack doesn't just contextualise Godzilla as an irradiated dinosaur, it presents the monster monarch as a physical manifestation of misery, powered by the tormented souls of the Pacific War dead. His enemies are a trio of Showa beasts, working together as the guardian spirits of Japan. That's Japan as a natural, physical space rather than a country. The landmarks and people that have sprung up all over the archipelago are of supreme irrelevance to these kaiju.

GMK features redesigns for all the major players by fellow Gamera alumni Makoto Kamiya. Undercard scrapper Baragon, inherited from Ishiro Honda's Frankenstein Conquers the World, is leaner and meaner, while Mothra is changed from a glittery butterfly into a cross between a camouflaged jet fighter and a wasp. Her personality is likewise adjusted. The passive peacekeeper becomes an aggressive irritant armed with an abdomen that can fire explosive flechette. Ghidorah is granted multiple physical forms, ranging from a stout, ground attack lug to a celestial gun platform. Godzilla himself is given the biggest overhaul. The coral spined slasher from the last two films is gone, replaced by a more obviously reptilian beast. In deference to his irradiated origins, this Godzilla also looks pained and swollen.

This Godzilla's chest appears smaller than usual, accentuating his neck and bloated undercarriage. His milky white eyes suggest both disease and a seething, satanic power. He's clever too. There's not an attack staged he doesn't anticipate, then counter. Disregarding the light continuity of the two previous eras, the Millennium series has instead riffed on the situations and themes of Ishiro Honda's original Godzilla, with each one approaching the idea of a definitive sequel differently. GMK is the most literate yet. Shusuke Kaneko plays with the prehistoric mysticism lightly stressed in the 1954 film, whilst also accounting for the Utopian spirit of the instalments that followed. Kaneko's command of the material is such that he is able to move seamlessly from scenes of absolute carnage to runtime swamping wrestling sequences without missing a beat.
Posted by Chris Ready at 23:50:00