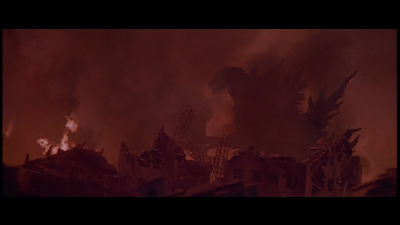 I doubt Godzilla 2000: Millennium was much of a film in its original Japanese, but Tristar Pictures' decision to overdub it with nonsensical English and junk the entire foley track in favour of children's television sounds certainly doesn't help. Equally baffling is Toho's insistence that only this version be distributed outside Japan. Although I have read that this re-edit tightens up an otherwise slack film, I could do without a re-recorded babble track that specifically seeks to emulate 1970s hack work. Godzilla 2000 tells the aimless, bloodless tale of kaiju storm chasers that race about in off-road Jeeps tracking the King of Monsters when he's not levelling Tokyo. It's a fresh take on the material that unfortunately never progresses beyond vague set-dressing.

New special effects director Kenji Suzuki repeatedly shoots himself in the foot by trying to composite a suit Godzilla onto daytime, live action footage of military manoeuvres. The end result is actually uglier than similar scale shots created by Teruyoshi Nakano's team for 1974's Godzilla vs Mechagodzilla. Koichi Kawakita, the hero of the Heisei phase, is a terrifying act to follow, but Suzuki's work here is primitive and, when augmented by cheap looking computer-generated effects, distracting. The only notable thing about Godzilla 2000 is an underlining tension regarding its conception and distribution.

Godzilla's main event foe is Orga, a clumsy looking oaf with a snout highly reminiscent of Roland Emmerich's iguana descended Godzilla. Orga also enjoys the CG friendly ability to morph, taking on the form of his opponent. Cue the beast wrapping its gaping snake maw around Godzilla and gaining green textured skin. Disappointingly, Orga's dorsal spines have barely grown in before the beast is defeated and ablaze from Godzilla's raw nuclear energy. Toho's message seems to be that Godzilla cannot be imitated, especially not by soulless virtual effects. Regardless of their intent, Tristar have the last laugh. Whatever the quality of the original, unmolested Godzilla 2000, the American studio's localisation work has since transformed it into exactly the kind of nonsensical trash usually seen polluting late-night TV schedules.
Posted by Chris Ready at 23:38:00