The Crow: City of Angels 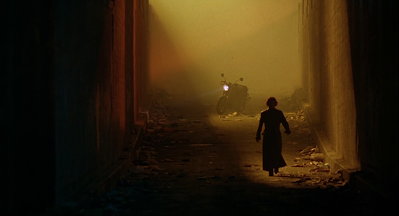 The Los Angeles of The Crow: City of Angels is a jaundiced slum, a crumbling collection of back alleys and dripping underpasses suffering through a drugs trade that peddles branded hits that look very much like gunpowder. Director Tim Pope and cinematographer Jean-Yves Escoffier have allowed the city's dense smog to settle into the streets, diffusing the sodium lighting and driving away everybody without the means to escape. Scouted destitution is complimented by soaring shots of scale models, a scratch built enclave that has had all the light sucked out of it. Although the police are mentioned as a force capable of encroaching on the criminals who remain, we never get to see LA's bully boys at work. It's bizarre then that the impetus behind the murder of this film's resurrected avenger is a stated desire to escape punishment - Vincent Perez's Ashe and his pre-teen son are gunned down after witnessing a gang hit, their bodies dumped in the river.
Given new life by his cawing familiar, Ashe erupts from his watery grave to slowly pick off the criminals who wronged him - a surprisingly pathetic clique who offer very little resistance to Perez's painted wraith. The actor leans into a playful affect when pulverising his foes, fawning and even mourning their deaths. These acting and writing choices - particularly the ones surrounding Iggy Pop's ceremonial dispatch - are ones that the rest of the film absolutely refuses to cater to. Whatever thought process underpins the actions of this recently bereaved father remain so mysterious as to be baffling. Crow 2 then is the sequel as an incompetent retread, a thinly written photostat that attempts to transform the collapsing ache of its predecessor into a easily duplicated formula. Although running less than 90 minutes Pope's film still manages to read as rambling and unfocused, a procession of unrelated, aggressively unentertaining, incidents that seem to have had both their methodology and subtext forcibly extracted. City of Angels offers a beautifully photographed inspection of a neutron bomb crater and very little else.
Posted by Chris Ready at 00:30:00

Email ThisBlogThis!Share to TwitterShare to FacebookShare to Pinterest
Labels: Films, The Crow, The Crow: City of Angels, Tim Pope