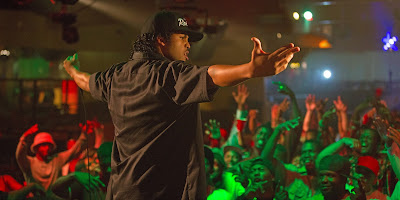 Like basically every other rock biopic, Straight Outta Compton is about packaging a series of disparate, contradictory events into a feel-good through line. Presumably the thinking with these things is to renew enough interest to sell some more best-of compilations. Shepherded to the screen by Dr Dre and Ice Cube in full control freak mode, F Gary Gray's film ditches any of the misogyny or outright underhandedness inherent to NWA's story to arrive at a heart-warming yarn about a bunch of friends knuckling down and doing well. 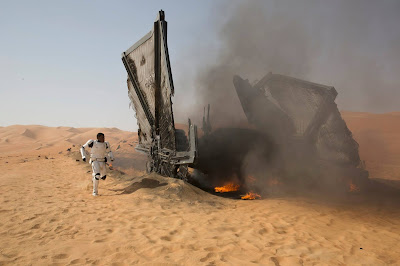 JJ Abrams, Lawrence Kasdan and Michael Arndt's rejuvenation of the Star Wars brand not only locates several distinct, likeable, characters, it also finds time to snatch ideas from the Prequel run then transform them into engaging narrative grist for an expanding saga. It's tempting to see Star Wars: The Force Awakens as Lawrence Kasdan's moment, the Raiders of the Lost Ark and Star Wars sequels writer finally getting to steer one of the great movie brat franchises without Steven Spielberg or George Lucas breathing down his neck. The structural bones may be familiar but the relationships and agendas Kasdan and his co-writers plant promise a saga built around traumatised, disaffected youth. 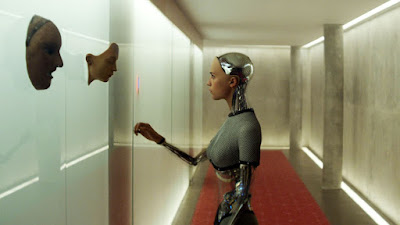 Ex Machina completes a loose trilogy from writer-director Alex Garland about the effects of othering and automation on the human psyche. Never Let Me Go (adapted from Kazuo Ishiguro's novel) proposed an underclass of clones bred for the express purpose of organ harvest; Dredd offered up a ruling class of men and women trained to act like robots. Ex Machina circles similar neuroses, lasering in on a new life-form that is able to take the limitations men have imposed upon it and transform them into a formidable arsenal. 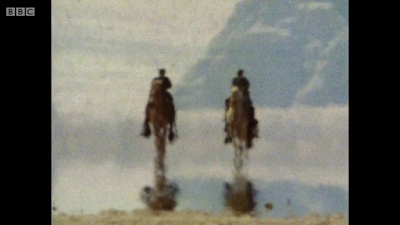 Adam Curtis waded through thousands of hours worth of raw news footage to assemble a piece that presents history as a chaotic beast that refuses to fit any one narrative perspective. Bitter Lake plays as an antithesis to the kind of glib, bullet point reporting designed to fill its audience full of certainty. The film clocks in at 136 minutes and digresses incessantly. Curtis uses growling, sunspot electronica and shapeless video footage to arrive at a street-level impression of how various hot and cold interventions have shaped Afghanistan post-World War II. 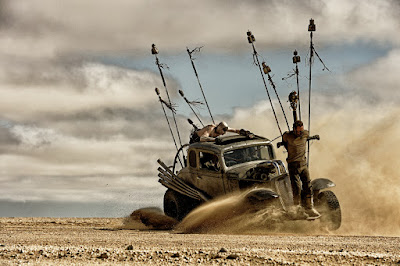 How does this film even exist?

Straight Outta Compton didn't manage to massage things into shape satisfactorily, imho. Ice Cube's dalliance with the Nation of Islam and his alleged anti-Semitism were raised then sort of left hanging, and the getting the band back together shtick towards the end - while, okay, apparently based on fact - felt unearned by the script.

Like the way you've framed the gender politics in Ex Machina. The way Ava weaponises her femininity is something I haven't seen discussed. Admittedly I haven't read much EM criticism, but what I have read hasn't drilled down on that. More of a 3rd wave feminist approach.

Lots of lip service in Straight. I mean all you get of Dre's violent run-ins with various women is the insinuation that he's kind of hard to live with because he's so super dedicated to his music. It's a con but I enjoyed it.

At its best, stretches of the film kind of reminded of the 80s section in Boogie Nights. nowhere near as good like, but there's something exciting about people driving around LA at night, just prepped to make a balls of something. Plus, you know, hearing Straight Out of Compton dialled up to cinema sound levels with DTS crunch was AMAZING.

Ex Machina is such a good companion piece to Never Let Me Go. Have you seen that? With both films it almost feels like a disservice to label any of the subjects as human, feels like a slur. In both cases the main characters are something distinct and different, especially when contrasted with the appalling examples of actual humanity around them. They're new lifeforms trying to hold on to what little they have.

I've seen the film and read the book. In fact the book's one of my favourite novels of the last 20 years. So sad and sooooooooooo horrid. Liked the movie a lot too.

They do work as companion pieces - good call - although I wouldn't want to assert that the characters in Never Let Me Go aren't human simply because it's their humanity that makes the book so powerful. If they're a nobler more intrinsically tragic species you lose something, I think. Or maybe not. Will mull it over.

The book's amazing. Oh yeah, they're definitely human, just shaped by a truly bizarre upbringing in which they're made to live like free range chattel. The way they're happy to give up their lives is both noble and completely terrifying. Think I'm just throwing around that idea of othering as a way to key into a completely alien mindset. They're 'better' than the humans they interact with.

Tbh, the book started to make me feel physically sick towards the end. What happens to them is so grotesque - perhaps all the more so because it happens within an ostensibly caring medicalised setting.

I get where you're going with the alien mindset stuff. I guess Ballard went in for something similar, although - and I say this as a huge fan - the pseudo-Freudian underpinnings of his characters never felt quite as plausible. Then again, Ishiguru's When We Were Orphans features some bizarre charactisation, albeit in sync with the themes of the novel.

How is When We Were Orphans? Haven't got round to reading it yet. What Ballard would you recommend as well?