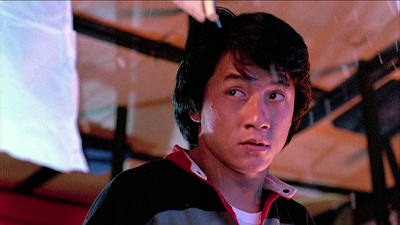 The 1980s was a period of great change for Jackie Chan. The actor-director began the decade re-working the bumpkin persona he had minted in the 70s under Yuen Woo-ping. Chan and his collaborators had been so successful in bringing comedy to the traditional kung-fu film that he was stuck replaying a formula; remixing the same basic format over and over again until it ended up the Hong Kong equivalent of a movie brat disaster.

A run-in with organised crime facilitated an ultimately disappointing attempt to break the American market. Chan was stuck with a string of disinterested, sometimes antagonistic, genre directors, bristling at his lack of control. The star bounced back by focusing on several collaborations with his Peking Opera School 'brothers' Sammo Hung and Yuen Biao. Borrowing the rough and ready approach of the Hong Kong New Wave, the trio worked together to devise an electrifying new action template that would end up making Chan the biggest box office draw in Asia.

Below are links to my thoughts on all of Jackie Chan's 80s output, ordered by their Hong Kong release date. Just click on the title to be taken to the review.