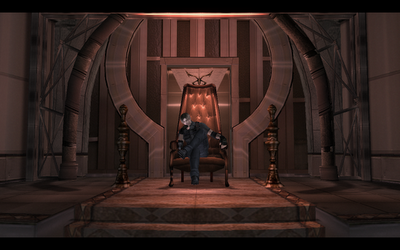 No escape! From the get-go, Resident Evil 4 locks you into a survivalist think pattern. Early progress sees you stumble into a psychotically aggressive township brimming with scrabbling sickle swipers, and sack-head chainsaw brawn. Immediately cast as an interloper, players must scramble in and out houses, setting up temporary defences in an effort to survive this onslaught. Your foes are no longer stumbling, un-thinking zombies, they're a directed mob, in the thrall of diseased cult. Enemies doggedly pursue the player, smashing through windows and doors in an effort to destroy the invader, progress dictated by where your attackers aren't. The soundtrack thunders with a melody of clashing metals and panic shrieks as you desperately micro-manage the dregs of your ammo.

If Resident Evil 4 was simply this experience, it'd be worth a year end position, but it's not. Survive the village, and you can journey into an inquisition castle full of mangonel armed Omega Man zealots; you'll plunge into a rotting industrial space prowled by a Fincher draft biomech; you'll pick through a lab haunted by indestructible, reconstituted flesh shapes. You'll ride a mine cart, harpoon a sea monster, phone-in chopper support. More, more, more. Resident Evil 4 is constantly throwing new information at the player. Ever evolving locations bleed into each other. Enemy types are reconfigured, rearmed, then recalibrated before being pushed aside for something deadlier. Injury feedback on enemies cues context sensitive hurt animations. Your menu chest heaves with currency and upgradable weapons. It even gifts you an escort character that can keep herself out of trouble. Resident Evil 4 is a relentless procession of fun. A game stuffed to bursting with form mutating ideas, onion peel area secrets, and unending alarm. Disaster Year's game of the decade.
Posted by Chris Ready at 00:34:00