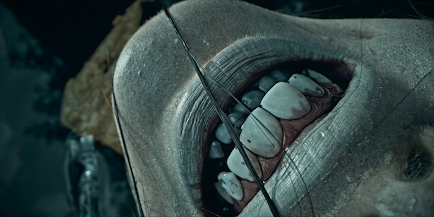 What The Sadness lacks in plot it more than makes up for in pulsing viscera. Set in pandemic era Taiwan, writer-director Rob Jabbaz's film stalks the well-trodden path of two disentangled lovers fighting their way back to each other while the world falls apart. Berant Zhu's Jim and Regina Lei's Katie are the young co-habiting couple who find themselves at the opposite ends of Taipei when a highly contagious sniffle suddenly mutates into the catalyst for ultraviolent mayhem. The Sadness differentiates itself from the rest of the endlessly shuffling pack by shifting the undead's focus from pure calories to a kind of consumption that views other people in transactional or material terms. The goal then is for these zombies to make playthings of the uninfected: they tease and torture their prey, delighting in the horrifying power they hold over other people's bodies.
Neither Jim nor Katie is afforded any real depth in The Sadness. Jabbaz's film preferring to consider the actors and their characters in purely utilitarian terms - both are simply good-looking focal points for the incoming waves of terror. In fact, the role through which we receive the most insight into this bubbling frenzy is Tzu-Chiang Wang's ominous Businessman. Initially encountered as a pestering presence on a packed commuter train, Businessman's mumblings quickly transform from a lonely, inexpert, attempt to trap Katie in a conversation to a frothing, stated, desire to rape her. He never shuts up, verbalising and even acting out every terrible thought that flickers across his mind. This explicit threat of sexual violence is woven throughout Jabbaz's film, positioned as the direct result of diseased brains that are no longer able to filter or thwart their invasive thoughts. The Sadness is a despairing film then, one in which the male example of the human animal is firmly, and repeatedly, contextualised in hopelessly predatory terms.
Posted by Chris Ready at 12:40:00