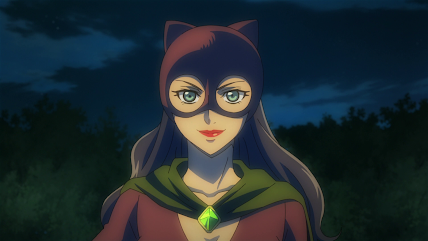 Like the Batman: Gotham Knight anthology and 2018's Batman Ninja before it, Shinsuke Terasawa's Catwoman: Hunted allows us another glimpse of American superhero characters as interpreted by Japanese filmmakers. This cross-pacific collaboration is a well-worn but still promising conceptual shake-up that the DC animated movies, as they currently exists, are in desperate need of. Director Terasawa, a key animator who has worked on everything from New Dominion Tank Police and the Megazone 23 OAVs to Barefoot Gen 2 and Akira, does weave a few atypical pops into this straight-to-video animated film, but - judging this vid against the last half-dozen - his interjections seem largely limited to the shot-to-shot construction of Hunted's finale action sequences rather than, say, anything that might actually alter the film's formulaic dramatic trajectory.
Similarly, the film's character designs are obviously indebted to Kotobukiya's Bishoujo statues, a range of collectible three-dimensional pin-ups that depict superheroines - and other pop culture mainstays - as beautiful young women in form-fitting outfits. Greg Weisman's screenplay is at least consistent with this cosplay affect, reaching for the kind of playful trysts familiar to fans of Lupin the Third (and the character's many animated adaptations); Elizabeth Gillies' Selina Kyle taking centre stage as a femme fatale in the Fujiko Mine mould. Catwoman: Hunted sees Bill Finger and Bob Kane's cat burglar traveling to Spain to bump heads with a secret society after stealing a different Gotham import's precious stone vig. Like the rest of the recent DC animated stable, Hunted plays like a feature-length pilot episode for a television series that hasn't been picked up. It's a piece stuffed with go-nowhere introductions and lumbered in the early going by an interminable car chase that inherits none of the elastic mayhem evident in Hunted's Monkey Punch derived inspiration.
Posted by Chris Ready at 01:11:00