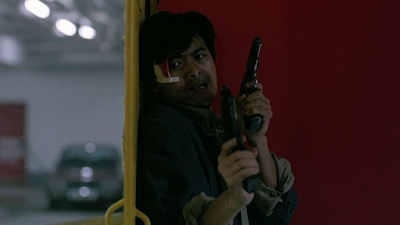 John Woo transitions away from a string of artistically anonymous comedies with A Better Tomorrow, a full-blooded fraternal drama set in and around a dollar counterfeiting ring. Ti Lung plays Sung Tse-Ho, the triad equivalent of a corporate criminal. Although widely respected and still clearly in full possession of his street-smarts, Ho functions in a safe, rarefied space. He wears expensive suits and schmoozes with white-collar clients, exchanging photostat bills for legitimate currency. His power, although apparent, is softly applied, grounded in his efficiency and serious, all-business demeanour. Ho is a man out of time, behaving more like a chivalrous warrior monk than a stick-up man.

A Better Tomorrow is front-loaded with scenes of Ho and his best friend Mark, played by Chow Yun-Fat, operating with a casual air born from immunity. There's never a sense that Ho and Mark's obvious criminality is a disadvantage for them socially. When the duo visit sprawling office premises for hand-offs, they are welcomed like local celebrities. Ho and Mark are respected, rather than feared, appreciated as the living embodiment of the self-perpetuating wealth they peddle. The main tension in Ho's life instead comes from his little brother Kit, a trainee policeman played by pop star Leslie Cheung. Ho's life of crime is so well insulated against reality that Kit has no idea that his elder brother is even a triad.

Kit clowns around in his own pocket universe with a girlfriend, played by Emily Chu, who allows Woo to burn through a few bumbling orchestra gags left over from the director's previous film Plain Jane to the Rescue. This giddy, upbeat atmosphere hangs together long enough to establish how Ho and Kit's relationship works. As with Mark, Ho is stability and positive reinforcement. The role of big brother is something Ho takes seriously. It isn't just an empty honorific to him, it's a mode of conduct that informs his every move. It's why he takes the fall for Waise Lee's junior mobster Shing when the pair are betrayed in Taiwan. Ho giving himself up to the police to protect the younger mobster when a routine money trade sours.

The film shifts at this point, the high-life punctured by Ho's arrest and subsequent imprisonment. His little brothers cope in different ways. Kit blames Ho, not unreasonably, for the death of their father and his inability to land a promotion within the police force. Mark seeks revenge, winding up with a shattered leg and a clunking metal brace. Upon his release, Ho's attempts to go straight anger a now-prosperous Shing and fail to win him any favour with his blood brother. Kit's rejection goes deeper than simply refusing to meet Ho though. Not only does Kit not want to anything to do with the present, reformed man but he also seeks to undo his past criminality, making ill-advised moves against the counterfeiting ring. For the closing act John Woo explodes this familial tension with an apocalyptic dockside shoot-out, using Mark to heal the rift between Kit and Ho.

Kit's bubbling hatred is used to underline and comment upon the stakes in play. Kit has spent the latter half of the film at Ho's throat, pounding on his penitent brother for a betrayal that the younger man believes has undermined their entire relationship. Here, surrounded by assassins, they will make their peace. Woo's strengths as a filmmaker go beyond an ability to manufacture incredible, kinetic action sequences, his genius is that he can make these interludes a physical expression of his hero's emotional state. Action is something that his characters track towards, a release that allows them to make their peace with the world. Despite his profession, Ho is a sympathetic figure. He's always working to better the lives and positions of the people that he loves. It's heartbreaking to see him shunned and attacked by someone he cares deeply for. Kit's spitefulness serves a purpose though, if he hadn't hated his brother it wouldn't mean anything when the two of them finally set aside their differences and work together.
Posted by Chris Ready at 13:38:00