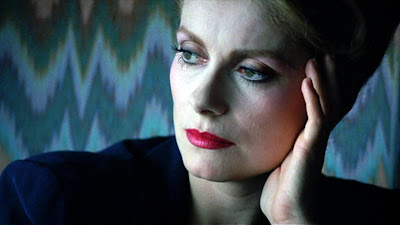 Tony Scott's feature début examines love and decay trough the prism of Vampirism, finding an undead Queen who cannot bear to be alone. Catherine Deneuve's Miriam Blaylock is evil by omission, an irresistible immortal who draws in lovers then infects them with her disease. She talks of eternity and an undying, never-ending love but what she's selling is actually explicitly impermanent.

Neither the youth, nor the affection, she offers will last forever. She ensnares people, making them slave to her before slowly nudging them towards a state of profound, nightmarish suffering. Miriam's partners are doomed to crumble, filed away in boxes while she puts the moves on her next pretty young conquest. Miriam refuses to free her victims from living death because she's sentimental, she'd miss them too much.

The Hunger arrived hot on the heels of Blade Runner, both films focused around a cast of characters confronting their own mortality. While Ridley's film finds bravery and vitality in the Replicant's cruelly truncated life spans, Tony takes a different tact, organising the cloying, selfish hopes of the bereaved into the horrid drives of a deathless evil. This unflinching emotional honesty is the core of a film that helped invent the language of aspirational 80s commercials while also mapping a clear line from Nicholas Roeg's self-imposed sieges to Shinya Tsukamoto's Tetsuo cycle.
Posted by Chris Ready at 19:24:00