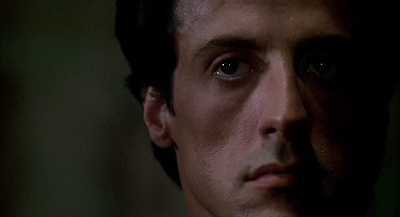 Writer-director-actor Sylvester Stallone takes a different tact with the third Rocky outing, arriving at a film that's as much about the numbing effects of money and fame as it is boxing. After several successful defences of the title he won from Apollo Creed, Rocky discovers that his manager has been secretly arranging squash matches to dodge challenges from genuine competition. The deception has a profound effect on Balboa, undermining his achievements and leaving him with an acute case of imposter syndrome.

Conflict rooted in ego drives Rocky III. Just as the title character has to overcome a paralysing lack of self-esteem, every other player is in search of personal validation that can only be conferred by locking horns with Balboa. Inveterate scumbag Paulie wants to be whisked up and given a job despite his unending negativity; Apollo Creed would rather set aside months building Rocky into a fluid fighting prospect than spend time with his own family. Mr T's elemental Clubber Lang has the most to overcome. He needs to conquer this evasive champion to get where he needs to be.

It's not like Lang doesn't put the work in either. While Rocky burns money transforming his training regime into an embarrassing expo event, Lang knuckles down, exercising alone in an environment that resembles the crawl space beneath a murderer's house. Shouldn't we be rooting for this loner? Is Rocky's gauche Scarface lifestyle supposed to be aspirational? Rocky III flips the underdog narrative on its head, asking us to cheer for an established and explicitly unearned status quo. Lang is too violent, too temperamental, too black to be the hero. Despite the two boxers sharing the exact same motivation - the paralysing fear of being poor in Reagan's America - it is assumed that the audience instinctively believes that one of these fighters is worthy to hold the title while the other is not.
Posted by Chris Ready at 21:25:00

I think you really get at the heart of why I think these sequels miss the boat on Rocky's characterization so much. And it really makes you appreciate Creed all the more for the course correction. Not only by actually giving us that black male perspective, but having a Rocky who resembled the guy we loved and related from the original.

Thanks! Yeah, there's a strange tension in Rocky III, the character's success has grown in step with Stallone's but there's no real acknowledgement of how that changes him or how we view him as a person. No wonder he fights a Soviet Terminator in 4, how else can we root for him as an underdog?