Sylvester Stallone in the 1980s - Nighthawks 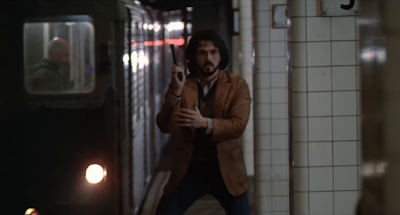 Sylvester Stallone kicks off the 1980s with Nighthawks, a slack and improbable potboiler that reaches for William Friedkin style verisimilitude but instead ends up a Neanderthal example of the star's scowling bruise 'em ups. Stallone and buddy Billy Dee Williams play a pair of insufferable New York cops drafted onto a terrorist extermination squad seemingly because everybody else on the force hates their guts. The duo spend weeks being screamed at by a self-impressed British spook while Rutger Hauer's eurotrash assassin prowls around the city, murdering women and planning a series of topical explosions.

Ghost-directed - at least in part - by Stallone, Nighthawks offers long, rambling, takes that land like conceited acting exercises. There's none of that marching powder pep the director would later bring to Rocky IV on display in either the framing or the editing. Nighthawks works best as a document, the pivotal moment that Stallone stopped trying to establish himself as the next Pacino and embraced his more violent, guttural, instincts. The immediate benefits of this transformative thinking are apparent within Nighthawks. Hamstrung by a meandering screenplay, Stallone eventually finds he is better able to hold his audience's attention with close-up grimaces or macho declarations rather than by pretending to be a real human being.
Posted by Chris Ready at 20:58:00